This is Episode 11 of Dice, Camera, Action.

Holly is joining us from Australia today. She says it is winter there. It's 6 AM and it is raining.

Jared's not here this week.

The group hit level 5 last week and they use some new spells in this session. 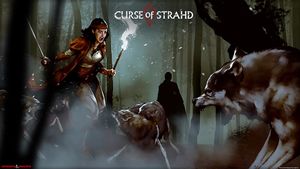 We're told that Diath is with the party, but he's so weak from being raised from the dead that he's useless. We talk about how the group sensed that the Abbot was using necromancy and that the players were confused about how a celestial could be evil.

Paultin spots Ezmerelda on the stairs and immediately evaluates her appearance. He says out loud that she's an "8." Evelyn quickly scans her skeptically, thinking the score might be a little high.

Ezmerelda greets the group. She doesn't like the Abbot either. She decides to accompany them. She says she is a vistani, but doesn't associate with them any longer.

Ezmerelda looks Paultin over and says he isn't too bad. He's at least a 6 in her evaluation. Paultin is impressed with her banter.

The heroes go down into Krezk to collect their wolf hunter allies and their buddy Ireena. There is a wagon there, with villagers mustered around it demanding wine.

Brigands "found" this wine cart and they are trying to get a lot of gold in exchange for the wine. It appears that they ambushed the driver and stole the cart.

One brigand has already been brought to the Burgomaster's wife. The heroes don't like the sound of that.

The Battle of Krezk[edit | edit source]

Suddenly, the group hears shouts. Brigands are dragging Ireena from the Burgomaster's house. Evelyn orders them to release her in the name of Lathander.

There are a total of eight fur-clad brigands. Ezmerelda picks out the leader and tries to use the "evil eye" on him, to charm him.

The lead bad guy, Kiril Stoyanovich, tells the group they're here on behalf of Strahd. They're werewolves! Kiril transforms. Everyone rolls initiative.

One werewolf grabs Diath by the foot and starts dragging him away.

Ireena stabs a werewolf in the groin. Strix misty steps onto a rooftop. Ezmerelda tosses Ireena a silver sword and challenges the werewolves to come get her. She makes a charisma check for that and rolls a natural 20. For the rest of this encounter, almost all of the werewolves are focused on her.

Paultin uses dissonant whispers to get the werewolf off of Diath. Kiril battles Evelyn.

Kiril calls on Mother Night for aid, which offends Evelyn. Kiril bites her. Evelyn fails her save with a natural 1. She doesn't know it, but Evelyn has contracted lycanthropy.

Strix is up on a roof. She spots someone in the snow inside the village walls, casually heading toward them. It's Strahd riding on his nightmare, Beucephalus! Strix yells out, "We have to leave!"

Strahd calls out to Ireena. He tells her to come to him - it's the only way to save her friends. Evelyn tells Ireena to ignore him because she should only marry for love.

Strahd tells Ezmerelda she is welcome to return to his dungeon rather than die here. Ezmerelda tells Strahd that once she find Van Richten, they'll destroy him. Strahd says that he, too, is looking for Dr. Van Richten.

Strix casts one of her new spells. Fireball! She scorches six werewolves and destroys the wagon. Ezmerelda avoids the explosion. Ireena is knocked to the ground by it, but is not hurt.

Evelyn beheads Kiril, leader of the werewolves. The other werewolves howl in sorrow. Evelyn howls in pleasure and gives an impromptu sermon about the Morninglord.

Mark points out that Evelyn's lycanthropy is starting to kick in.

The werewolves jump Evelyn and claw her. She's down to 0 hit points.

Paultin goes to get horses and come back playing a triumphant tune on his bagpipes.

Ireena gets on Strahd's horse. Strix cries and pees herself.

A swarm of bats drops from the sky and attacks Strix on the roof. She clutches her cranium rat close to her, protecting little Stinky from the bats. Strix uses misty step to teleport onto one of Paultin's horses and yells for somebody to heal Evelyn.

Ezmerelda has a potion of superior healing. She uses it on Evelyn and heals her for 16 points. Evelyn wakes up and says that she met the Morninglord and he told her to continue her battle.

The bad guys withdraw. Strahd tells Evelyn, "Your long nightmare is just beginning." His nightmare takes flight. It looks like Strahd is getting away with Ireena.

Strix casts hold person on Ireena, hoping that it will stiffen her body and cause her to fall off. She points out that horses are hard to stay on, especially when the horse is flying.

Strix casts the spell.. it works! Ireena falls 40 feet. Ireena plummets to the ground and lands with a sickening thud behind a building.

Strahd lets out a horrible scream. That's where we stop.