This is Episode 12 of Dice, Camera, Action.

Holly is on a plane and can't make it this week. 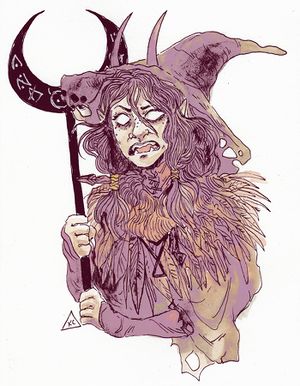 Strix runs away. She spends most of the session on a horse trying to get through the gate. Evelyn runs around the building to find Ireena. She doesn't spot her.

Strahd turns invisible. The group is extremely alarmed. Strahd has greater invisibility, meaning he won't become visible when he attacks or casts a spell.

An invisible force grabs Evelyn by the throat and drops her to 0 hit points.

Diath is on Strix's horse. They are riding toward the gates.

Evelyn climbs on Paultin's horse and heals herself.

Strahd approaches and attacks the horse. The horse's throat is slashed. Then its guts pour out. Walter the horse is dead. Paultin and Evelyn roll poorly and they end pinned underneath the corpse of the horse.

Paultin gets free and pulls Evelyn out, too.

Ezmerelda puts her sword at Ireena's throat. She warns Strahd to back off or she'll mutilate Ireena's corpse.

Ezmerelda realizes that since Strahd is a vampire, he can't enter a residence unless he's invited. She races into a building and urges the others to join her.

Paultin runs in and hides behind a pig.

Diath thinks that hiding in the house is a terrible idea. He's pretty sure that Strahd will just hit the house with a fireball. Diath throws a dagger at Strahd and hits, but rolls nothing but one's on damage.

Evelyn tries to charm Strahd's nightmare into betraying him, but it has no effect.

Diath climbs onto a rooftop and Strahd follows. Strahd tries to charm him but Diath makes his saving throw.

The rest of the group is going to flee.

Beucephalus the nightmare tries to trample Diath. Diath jumps on to the back of the nightmare. They fly up into the air, about 40 feet off the ground.

Evelyn casts find steed. She gets to choose what it looks like. She describes a majestic beast. But Barovia twists it into a hideous undead monstrosity. She names it Mourning Glory. It is skeletal, has a tattered saddle, and it has bits of tattered flesh clinging to its bones.

Ezmerelda casts protection from evil on Evelyn and tells her to find Rudolph van Richten.

Diath rolls well as he jumps off the nightmare, slides down a roof, and plops to the ground taking no damage whatsoever.

Strahd bites Ezmerelda. She's down. Chris gives Ezmerelda one final, dying action. Ezmerelda utters a vistani curse! Both Ezmerelda and Strahd are swallowed up in the fog. They're gone.

Paultin is shocked that she's gone, as Madam Eva had told him that Ezmerelda was important.

The group leaves Krezk and comes to a frozen river. Paultin spots a wagon that he's seen before when he was young. It reminds him of his mother.

He hears Ezmerelda's voice say "remember." Paultin realizes that he was once a vistani. He remembers how to cast the vistani curse and use the evil eye.

Strix the NPC seems to know something about all of this, but won't say what.

Paultin finds what appears to be a Blinsky toy - the Strahd doll! Paultin is instantly terrified of it. He first saw it when he was a kid.

Diath asks Paultin if the name Rudolph van Richten means anything to him. It does. He remembers Dr. van Richten murdering his family. That's where we stop.