This is Episode 18 of Dice, Camera, Action.

Strix hears the flapping wings and she sees Kasimir drawing his scimitar. Strix yells at him to go take care of it. This wakes up Diath.

It's gone. Nobody is sure what it was. The group is able to get their long rest. Evelyn didn't turn into a werewolf.

The group is able to traverse the rest of Tsolenka pass without too much difficulty. Evelyn smells wolves. Not werewolves.

The waffle crew arrives at the Amber Temple.

Kasimir explains a bit of the temple's history. Chris describes the vestiges in the temple as "gods of secrets." Great wizards locked them away.

As the group frets about going inside, Diath calls Kasimir "ass smear." Kasimir ignores Diath and turns around. He senses that creatures are coming. Dozens of creatures.

Here they come. They are wolves. Some of them are horse-sized! Kasimir makes like he's going to hold them off. The group panics and goes into the temple. 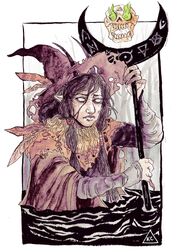 They creep around a bit. They find a big statue of a robed hooded figure. A "dark god."

Suddenly, a bolt of lighting comes out of the hood of the statue and strikes Evelyn. Evelyn takes 47 points of damage. Then the bolt leaps to Diath (this is a chain lightning spell). Diath takes 44 points of damage. He's down.

Then the lightning leaps over to Strix! Man, this is one nasty spell. Strix takes 44. She's down, too.

The group doesn't know if the statue did this or if there is someone up there.

Strix wants to shoot a fireball up there. The group seems to think it won't do anything. She does it anyway and does over 40 damage to something.

Here comes a fireball from the statue. Evelyn covers Diath. She heroically takes all of the damage to save him. She rolls a saving throw with disadvantage. She fails. She decides to use inspiration, so she gets to re-roll. She rolls a... 3.

Diath and Evelyn are unconscious. Strix is the only hero standing, aside from NPC Paultin.

They're in an area away from the statue. They're safe for the moment.

Chris checks Paultin's sheet to see if he has any healing spells or items. He doesn't. Strix pours a potion into him - one of the potions the group took from the hags in the Old Bonegrinder[1].

It's a potion of longevity. Diath goes from the age of 28 to 18. The group finds this very amusing.

Strix force feeds the unconscious heroes snacks. She decides to go find Kasimir in her gaseous form. Outside, the wolves have surrounded him. They're not attacking each other. They seem to be on the same side. It seems like they are waiting for the group to come out.

Strix returns to her normal form and yells at Kasimir. She tries to intimidate him. Kasimir tells her that this mountain is her tomb. He says he is going to kill her if she comes any closer. Strix runs back inside.

She rejoins NPC Paultin. They hear a huge rumbling sound. It sounds like the mountain is coming down outside - crashing ice and snow.

The heroes realize that someone brought snow down from the mountain and buried this place. The group is trapped in the Amber Temple.

Strix cries. She drinks some of Paultin's wine. They dump some wine in unconscious Evelyn and Diath. Strix decides there's only one thing to do: Call on Lathander for help.

Strix earnestly asks Lathander for aid. She even offers to stop calling him "Butthander."

There is no answer. The torches slowly go out.

Strix decides to explore the temple alone. This is not good. She goes into a room and comes upon three flameskulls, hovering skulls that can shoot rays of flame.

They send rays of green flame at her. She's a tiefling, so she takes half damage from fire. She's got just a couple hit points left. She runs and shut the doors.

She limps back to her friends. The group rests for a long time. Evelyn and Diath wake up and regain some hit points.

The group is really frazzled and can't agree on what to do next. Strix has an idea of magically disguising herself as Strahd to boss around any bad guys they meet in the temple. Diath thinks that won't help against the statue.

They finally decide to attack the flameskulls. They open the doors. The flameskulls were waiting! Three fireballs explode in the room.

NPC Paultin goes down and... melts. As if he was made of ice and snow. That wasn't Paultin! That's where we stop.