This is Episode 3 of Dice, Camera, Action. 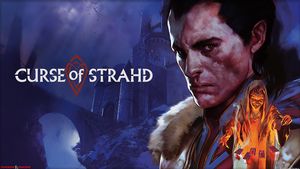 The wolves surround the heroes. The nearest wolf is about 30 feet away. Ismark says that they are the eyes and ears of the devil. Strix tries to intimidate the wolves and rolls a one. The wolves roll their eyes at her.

Lightning flashes for a moment - they spot a humanoid shape. It disappears. The wolves back off...

Strix befriends a crow. It perches on her head, then flies over to a tombstone of someone named Escher. It flies out of town toward a place called Vallaki. The group decides to follow it.

The heroes walk down a road for a bit. They pass by an old gallows. When Diath looks back at the noose, he sees a body hanging from it. The rest of the group sees it. Evelyn wants to go poke it. The body looks just like Diath. Diath examines it and is freaked out.

The group goes to Tser Falls. There are vistani camped there, and they are drunk. Paultin jumps right in to party with them. Evelyn does too.

Diath and Strix creep around. They slip into a tent and meet a fortuneteller - Madame Eva.

Madame Eva knows a lot about Strix. We get confirmation that Strix was a member of the Dustmen in Sigil. Eva says that Strix was actually born in Barovia and that the villagers would have killed her if she had stayed. The vistani brought her to Sigil when she was a baby.

Madame Eva says: "You were raised in the city of doors. All doors lead home."

Strix has an aunt, a brother and three cousins. Her brother is dangerous and special, like Strix. He is a "bad man." Madame Eva says that when Strix sees rotten wolf heads, her family is close.

The rest of the Waffle Crew gather in Madame Eva's tent. Paultin is drunk. Madame Eva knows much about them, and freaks everyone out.

Eva says that Evelyn was brought to Barovia by Lathander. Evelyn is the "key" to everything that is happening. "It is a wonder that Strahd hasn't noticed you, yet."

Madame Eva does the tarokka reading. This reading tells their fortunes and gives them clues as to what items that they may need are located.

Evelyn gets jealous when Madame Eva says the vistana will be very important to Paultin. Later on, she convinces Paultin to come visit a windmill with her once the adventure is over.

Diath asks Eva why he saw himself hanging from the gallows. She says the land is trying to turn the heroes against each other and themselves.

Paultin, still drunk, almost barfs on the table. He wants Madame Eva to rank his mystery woman's looks on a scale from 1-10. Madame Eva starts swearing at the heroes, telling them to "get the f*ck out" of her tent.

Hanging out with the vistani, the group learns about a wizard who rallied the people to fight Strahd at Castle Ravenloft, but the wizard fell a thousand feet to his death during the conflict. The vistani went to find the wizard's body, but it was gone.

The group learns that Strahd once had a consort named Tatyana. They also learn that many Barovians have no souls - they have no charm and no spark. They don't cry.

Strix asks the vistani about ravens. Ravens carry lost souls with them. They don't associate with people. Strix gets on her horse and is described as a "moth-eaten heap of sadness."

The adventurers borrow horses from the Vistani. Strix and Evelyn have to share one. It is named Valentina. The other horse's name is Walter.

The group argues about whether or not to check out the windmill that they specifically were told to avoid.

The adventurers travel the road and pass numerous landmarks. They come to another set of massive gates.

They spot.. a windmill! And the mysterious crow is there. That's where we end it.

Chris asks the group if they want to go to the windmill. Everyone but Diath wants to go.