This is Episode 32 of Dice, Camera, Action. 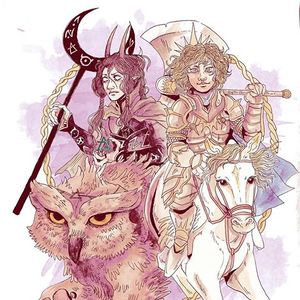 This is the first episode of season 2 of Dice, Camera, Action, which uses material from the Storm King's Thunder published adventure.

The heroes are in the woods and it's very cold. They travel for a bit and they roll really, really low. They start to freeze to death. Their speed is cut in half.

They meet a dwarf with a Swedish accent. He seems to have no feet. It is eventually revealed that he is on stilts. The group befriends him. 10 orcs have been tracking him. They attack!

The orcs pull out javelins. Zog, the dwarf, points out that orcs suck at throwing javelins. Then he immediately gets hit with one.

An orc gets a critical and Zog is down! The heroes are used to NPCs dying, even Evelyn is jaded. They finish off the orcs and heal Zog.

Zog is on stilts. How did he lose his legs? He says he slipped and fell. He lost themdue to frostbite. The players are really grossed out by this.

The heroes spot an owlbear. It's looking for food. Evelyn and Strix desperately want to catch it and tame it. Before they can do so, they see something else in the sky. It's a white dragon! The crew hustles in the direction of a nearby lodge where rangers live.

The dragon circles back.

The waffle crew runs inside the lodge. The dragon does not seem to be coming after them.

The group relaxes and chats with Zog. Zog was tasked with delivering a message to this place, but it looks like nobody’s home. There's only one thing to eat: waffles. The heroes have been trying to eat waffles since episode one. They seem skeptical that this will pan out.

Strix hears a noise outside. She looks out a window, but she can't see through the blizzard. Strix leaves some food outside the lodge, in case it is the owlbear.

Paultin summons the waffle dome and gets in.

The heroes cook and eat the waffles.

Perception checks. Diath hears a scratching noise up the fireplace chimney. Something is crawling down.

It's Murderbot. The group screams in horror. Murderbot walks through the fireplace. Now he's on fire.

Paultin wants to be friends with him. Murderbot looks through the dome and gives him a creepy wave. That's where we stop.