This is Episode 4 of Dice, Camera, Action. 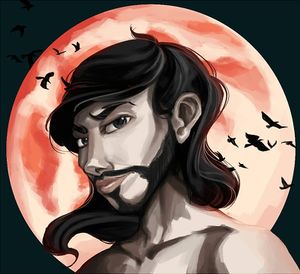 Evelyn casts detect evil/good. She detects both good and evil in the tower.

The raven that lead the group here transforms into a naked man. He's a wereraven named Falkon.

Falkon says that he wants the group to help him defeat the evil inside the windmill. Children have been abducted and taken into this place, which is called the bonegrinder.

The heroes go in and look around. There are pastries in the oven. The adventurers are sure these are "people pastries." There are women upstairs. They yell at the heroes to go away. Falkon tells the adventurers that those women are hags.

Falkon turns into a raven and tries to sneak upstairs to take a peek. He rolls a one on his stealth check.

The hags taunt the heroes from upstairs. They say, "...mother will be home soon."

Diath blocks the front door with a cart and puts down caltrops. The group heads upstairs and yup... two hags.

Evelyn leads the charge and attacks. The group misses a few attacks on the hags. The hags turn invisible. Evelyn swings blindly and hits an invisible hag.

Falkon goes downstairs and grabs a bag of flour. By the time he gets back upstairs, both of the hags are visible.

One hag becomes visible as she casts vicious mockery. Evelyn makes her saving throw against it.

Paultin pulls two kids out of crates and brings them downstairs as Falkon runs upstairs with the flour. He's still naked, except for a single sock.

The battle rages and the group gains the advantage over the hags, who jump through a window to escape.

Diath looks out the window and he doesn't see the hags. They've turned invisible again.

Someone tries to open the front door from outside. It's either the mother hag, or the two injured hags. Diath has a great idea. He asks Falkon to turn into a raven, fly outside and see who is out there.

It's the mother hag. She yells for her daughters to open the door. Falkon uses his mimicry ability to imitate one of the daughter hags and try to urge the mother not to come in.

Strix goes downstairs and checks a cabinet. She's sure this is the place mentioned by Madam Eva and she thinks it is somehow linked to her past. She loots three elixirs, respectively labeled "Youth," "Laughter" and "Mother's Milk." Then, Strix checks out a barrel full of demon ichor. She tips it over.

Outside, Falkon gets a look at the mother hag. She has a cart with a sack in it. It appears there is a child in the sack.

The adventurers are kind of messing around at the tower as they try to decide what to do. Evelyn tells the group to run and that she'll hold off the mother hag. The group doesn't listen.

Most of the group ends up running over to fight the mother hag. The two rescued kids hide in tall grass, and Paultin keeps them company.

The invisible, injured hags close in on Paultin. That's the end of the session.