This is Episode 42 of Dice, Camera, Action. 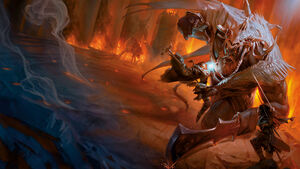 There are four dwarf slaves watched over by a big, fiery salamander. A D&D "salamander" is a large, burning snake/humanoid. The heroes attack it.

Diath runs forward and leads the salamander to the group. Paultin hits it with a thunderwave. The salamander attacks Evelyn, whose armor of invulnerability cuts the damage in half. She had taken this magic armor off of the dwarf NPC Krak, who has gone missing.

Strix casts polymorph and turns the salamander into a frog. Chris points out that if they damage the frog, it will turn back into a salamander.

Polymorph is a concentration spell that lasts up to an hour. Strix will have to hold it. They are looking for a pit to throw the frog in. Paultin ends up putting it in a bucket. This bucket ends up on the line in the foundry.

The group frees the dwarf slaves and continues on.

Strix wants to turn into a rat and scout ahead.

She enters a massive foundry where giants, dwarves and ogres are working. One giant is bullying a dwarf, dangling it over a furnace.

Strix goes back to tell the crew what she found. The group decides to free the slaves. Strix assumes gaseous form and returns to the vast foundry area. She sees four huge dogs in a pen. Strix considers cutting them loose. Anna works in a "Who let the dogs out" reference.

Strix avoids some ogres and indeed lets the dogs out. The dogs go grab some dwarves and start dragging them back to the pen. Then, Strix is spotted by the bad guys.

The group hears the commotion and runs to the room. As it becomes apparent that something is amiss, the giant who was bullying the dwarf actually drops him into the furnace.

Paultin tries a crown of madness on an ogre, but it makes its save. The group is shocked. Evelyn spots the frog/salamander in a bucket.

Diath crawl-dashes, sneaking past ogres. Evelyn grabs the frog and throws it in the hell hound pen. The hound swallows the frog, who turns into a salamander and it's not pretty. They end up destroying each other.