This is Episode 5 of Dice, Camera, Action.

Critical Role DM Matt Mercer is running the game...? They're fighting four tarrasques. Paultin dies. Evelyn cries and says, "My one and only love!"

Chris Perkins kicks Mercer out. Chris says he had to use the restroom.

Battle Against the Hags[edit | edit source] 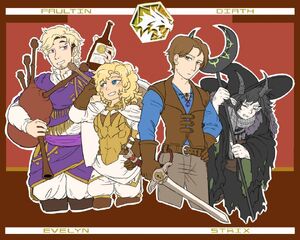 Two green hags, invisible, are about to murder Paultin, who is protecting a pair of children freed from the clutches of the hags. Suddenly, the NPCs that had been quietly accompanying the group jump in. Ireena and Ismark attack the hags.

This battle takes place 5 to 10 feet from a precipice. Paultin grabs the kids and flees. We learn later that the NPCs cause one hag to fall off the side. The other hag lies in the grass, presumably dead. Over by the front door of the windmill, the group keeps rolling natural ones. Diath stabs the mother hag. Falkon, in bird form, chews up a dream pastry and tries to regurgitate it into the hag's mouth. The hag fails her save.

These pastries have a magical effect, detailed on page 125 of Curse of Strahd. She's in a trance for d4+4 hours and she's incapacitated. Evelyn, however, does not know this. She stabs the hag and wakes her up! The hag is out of her stupor. Strix casts a chromatic orb spell, but rolls a natural one to hit. The group's dice are ice cold. Falkon assumes human form again. He's naked now.

He calls out "Eyes up here, hag!" and gives her an uppercut, but her chin is like iron. It is decided that the name of this episode is "Naked Uppercut in the Rain." The hag turns invisible.

Strix hears trouble over by the precipice. She spots Ireena 40 feet down, hanging on to a rock. A hag is holding onto her. Both are dangling 120 feet in the air.

Strix tries to intimidate the hag into letting go of Ireena. Strix tells the hag that her mother is very angry. She has disadvantage on her check. Strix rolls well! The hag flinches and falls 120 feet to the rocks below. Back by the front door, Paultin casts faerie fire which illuminates the invisible mother hag.

Evelyn drops the mother hag and does a dramatic religious prayer/pose. Strix lowers a rope to Ireena and almost falls off the side. Ireena is wearing heavy armor, and is too heavy for one person to pull up. Ismark and the other heroes run over to help.

As the party is trying to pull up Ireena, the hag in the grass gets up. The hag charges forth and crashes into the line of people holding the rope. The group makes their saving throws. Ismark finishes her off.

The group goes over to Morgantha's cart by the front door and pulls the third kid out of the sack. There are three rescued kids in total: Myrtle, Freek and Emmerich.

Emmerich is a Barovian shell, he has no soul. Freek is attached to Paultin and follows him around. Paultin doesn't want to call the kid "freak", so he refers to him as Jimmy. We learn that Falkon was once close with Escher, but that Escher is now evil and allied with Strahd. Falkon tells the heroes to kill him and to make it quick and merciful.

Diath loots a dream pastry. The group decides to take a long rest at the windmill. During this time, Strix inspects the potions she found last time. One is a potion of longevity, another infects the drinker with cackle fever, and the last one is a poison called pale tincture. The next morning, the heroes set the windmill on fire. Ismark takes the children back to Barovia for their own safety. Falkon has to leave the party.

We get a bunch of amusing goodbyes, including a naked hug between Falkon and Diath.

The Next Town Over[edit | edit source]

The waffle crew heads out down the road. Eventually, they come to the village of Vallaki. They are stopped at the gate. The group tells the guards they are here for waffles and to defeat Strahd. Diath is introduced as "Diath, Windmill's Bane." The group learns that waffles can be had at the Blue Water Inn. A guard points out that Strix, a tiefling, looks like the burgomaster's right hand man. The group enters Vallaki, and that's where we stop.

The group has hit level 4. Chris decides to give Paultin inspiration for the faerie fire and gives Strix inspiration for intimidating the hag. Inspiration can be used to re-roll one roll in a future session.