This is Episode 58 of Dice, Camera, Action.

Strix gets on her broom and flies 30 feet up. Strahd gets on his horse. Diath stabs him again. Strahd takes the hit and rides off, chasing the horse-drawn carriage that his brother and Tatyana are fleeing in.

Soldiers emerge from the castle. 12 are one the ground, rapidly approaching the heroes, 12 more are up on the battlements, readying ranged weapons.

A priest of the Morninglord arrives. He casts bless on three of the soldiers.

Strix decides to go after Strahd.

Evelyn uses her winged boots and disengages from the soldiers. She is going to fly after Strahd.

Strix's hat blows off. She chases it. Dex check to grab it. She rolls a one. The hat flutters down. Strix barely stays on her broom.

Evelyn is hit by 5 bolts. She takes 22 damage. She falls from the sky and takes 9 more damage, costing her one death save.

The cleric stabilizes Evelyn. Waffles scampers over and tries to revive her.

Strahd's crossing a bridge. Strix decides to try to ram him off the side. Opposed strength check. Strix rolls a natural 20! Strahd tumbles onto the mossy bridge. His horse keeps going.

He gets up and gets back on his horse. She tries to talk sense into him. He scowls and rides off.

Strix flies up and casts poison spray on Strahd. She casts this by squeezing her pet cranium rat and it comes out like a fart cloud.

Strahd jumps on to the carriage and Jesper engages him. Strahd knocks Jesper into Strix and they both fall to the ground. Strahd's horse tries to trample them.

Strix hits Beucephalus with a fire bolt. The dark powers reach out and use the flame to transform Beucephalus into a nightmare. Strix is getting out of here, but doesn't want to leave Jesper behind. He tells her to go.

She slaps the horse around with mage hand to distract it while Jesper runs away. Then she takes flight.

Back at the castle, Rahadin hobbles over to the priest, who heals him.

Rahadin summons a phantom steed to go help Strahd. Diath tells him about the Tome of Strahd. He urges Rahadin to read it. Rahadin takes the book and heads inside.

It starts to rain. Diath and Paultin are being held by the soldiers.

Strahd pulls Sergei out of the carriage. Strix stats throwing items to him. Her driftglobe, a heart.

Strahd draws his sword and throws it at Strix. Strix is hit and after the damage is tallied, she has 1 hit point left. Strix tells Strahd he's going to regret killing his brother, and she flies away.

Strix decides to fly into the village of Barovia to look for a healer.

Strahd returns to Castle Ravenloft and the carriage an hour later. Sergei and Tatyana are still alive. Strahd orders for Leo and his mother to be brought out. Strahd decapitates Leo in front of his mother. The Duchess is dragged to the dungeon.

Then Strahd calls for Paultin to be brought over. He decapitates Paultin.

Strahd approaches Diath. He weeps, as he realizes he let everyone down. Diath is decapitated. 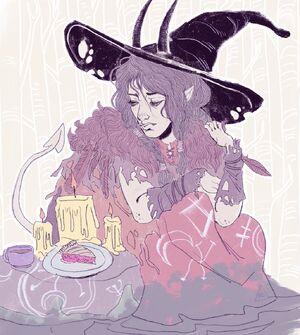 Strix was in the village when she learned that her friends were dead. She ends up living in a hut in the woods for years. Eventually, Waffles and Simon found their way to her. As time rolls on, she notices that animated scarecrows are spying on her.

There was an uprising in Castle Ravenloft, people died, the mists came. Strahd is a vampire again.

Over time, Strix makes friends with the vistani, the dusk elves, and the real Kasimir.

Eventually, the scarecrows lead Strix to another hut - the creeping hut of Baba Lysaga.

Holly says that Strix spent some of her childhood in a hut with chicken feet. Baba Yaga's Hut.

Strix quietly looks around inside the creeping hut. In the hut is a bathtub full of blood. Someone sits up. It's an old woman, covered in blood. It's Baba Lysaga, a hag.

They become friends. Lysaga takes magical baths in goat's blood that stops the aging process. She teaches Strix how to do it.

Baba Lysaga was the midwife who brought Strahd into the world. Strix is not happy when she learns this, and the two cease being friends.

Strix makes friends with the revenants of Argynvostholt. Eventually, they go to the Amber Temple on a quest to resurrect Strix's friends. It is soon revealed that the revenants make dark pacts with the vestige of Zhudun the corpse star. That pact gives them the power to bring the dead back to life.

Strix and the revenants go dig up the waffle crew.

Diath awakens in an open coffin. Standing around him are vistani, dusk elves, and an undead knight. Strix is there, too, as is a large, very old owlbear.

Paultin is resurrected as well.

Diath hugs Strix. He tells her that he's sorry.

Next up is Evelyn. Light comes into Evelyn's body. She's still a construct, fully restored.. She wakes up screaming.

They'd been trapped in the ethereal plane for 50 years.

Evelyn opens the compartment where Juniper, her mouse, was. It's dead. Strix's cranium rat is dead, too. The revenants raise them, too.

Kasimir says, "Thank you for everything you tried to do." The players are very shell-shocked.

A vistani gives the adventurers a wagon. Apparently it can be used to leave Barovia.

The group realizes that they are missing all of their belongings. The vistani informs them that they stole it all back. They also give the group two big casks of wizard of wines wine.

A revenant named Sir Godfrey leads the group out. The heroes leave Barovia and return to Faerun. End of session.