This is Episode 59 of Dice, Camera, Action.

Return to the Realms[edit | edit source] 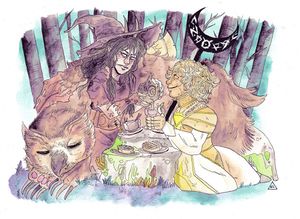 Strix is driving a vistani wagon, cutting a path through the snow. The heroes have returned to Faerun (the Forgotten Realms). Evelyn is sitting next to her.

The snow is high - it is up to the horse's stomach. There is a skeletal horse following them ridden by Sir Godfrey. Also following is Waffles the owlbear, who is now very old.

In the wagon is Diath, Paultin and Simon.

Strix starts humming and Evelyn joins in. They actually sing a song on the stream.

We learn that someone named "Father Sunbright" sang the same song. The group is aghast that everyone in Evelyn's life has these ridiculously sunny names.

After 50 years as a lonesome spirit, it has taken Evelyn some time to believe that what is happening now is real.

There are two casks of wine in the wagon, which Paultin begins to drink from. Once the group left Barovia, Paultin felt a weight lifted from his shoulders. The wagon hits a bump and a bunch of stuff stashed in a concealed spot of the carriage falls on them.

Among the detritus is an envelope with a seal that bears the emblem of Strahd. In it is a note.[1]

Chris mentions the narcissist's curse - Strahd cannot love anyone other than himself.

The waffle crew have emerged in a section of the realms. They are very far from Citadel Adbar.

They make camp. Evelyn realizes that Paultin's son is 50-something years old. They send Simon out for firewood and he comes back an hour later with a single pine cone.

Strix drinks from a flask of goat blood, which she now uses to remain eternally young. Waffles goes into the woods and comes back with blood on her. She hunts for her own food, now.

Strix speculates on the possibility of shoving Simon into the fire. Simon gives her the finger and she returns the gesture.

In the air, the group spots a flying ship approaching. It is kept aloft by a giant balloon.

It's got a draconic symbol on it and has ski runners on the bottom. It has mounted weapons: A harpoon and a heavy crossbow.

From the deck of the ship, Captain Xandala spots the group. Her crew is dressed in black and wearing masks.

Diath looks at their garb and is sure that they are a cult. The captain has a pet pseudodragon named Summerwise. The pseudodragon likes Paultin, who pets it.

The captain offers to give them a ride. The waffle crew accepts.

Strix has a bunch of new gear and new clothes. She has three puppets, one that looks like each of the heroes.

Xandala meets with the group in her cabin and explains that she's on a secret mission to the spine of the world. The cultist crew "came with the ship" and they are unaware of what her true goal is.

Xandala asks the waffle crew to help her. She's a member of the Harpers, a secret organization of good guys. Her mission is to obtain the ring of winter. Right now, it's in the hands of the bad guys.

Captain Xandala says that someone named Artus Cimber was the last person known to have the ring.

The group agrees to help her. The waffle crew is going to Kronenheim, a lair that not much is known about.

The waffle crew learns that the year is 1490, which is about the time they left when they were pulled into Barovia.[2]

Chris mentions that Paultin has had no drinks for the 50 years he spent as a lonesome spirit.

The heroes are given cabins to sleep in. They'll need to buddy up. The players decide that they don't care who sleeps where. The arrangement ends up like this:

The group did take the horse that was pulling the carriage along. Sir Godfrey is on board as well.

The next day, Strix notices that the ship's crew is acting shady. She spots one of them talking into a sending stone, a magic item that allows you to communicate with someone else long distance.

The group informs the Captain that treachery is afoot. She knows about this already and she says that she knows who they're talking to.

It is pointed out that Paultin can use his mandolin to make things invisible. Diath goes invisible to spy on the bad guys. He rolls well. The bad guys communicate this through the stone in Draconic, a language that Diath does not speak.

Diath and the heroes go to tell Captain Xandala, who is below decks talking to Gale, the air elemental that powers the ship. The heroes notice that Xandala's skin has light scales.

Xandala is quite unimpressed with Diath's attempt to recall and relay draconic words and phrases.

The ship has drifted over a canyon of ice. As they look down, they spot a closed-off section. There are giant buildings built into the ice that protrude slightly. This is the frost giant village of Kronenheim.

As the ship descends, the adventurers see that the plaza of the town is full of dead giants and slain giant wolves.

The airship lands. Cautious investigation reveals that these corpses have been in the cold for some time. The snow has obliterated any tracks. All of the lodges have huge open doorways.

The wounds indicate that the corpses were torn apart by something much bigger than them.

Nyzroth says he thinks that the giants were killed by a white dragon.

Sir Godfrey is going to watch the ship. Xandala asks Summerwise to stay on the ship, along with Waffles.

The heroes enter a building and spot the tracks of a lone humanoid. This person made their way from the rift up into the lodge. The tracks are very recent.

The heroes come to a big hall. There's a massive chair that has skulls piled around it. The tracks lead to another area. The person seems to have climbed up a pillar.

The heroes ascend the pillar, which leads to the rafters. No more tracks. There's a huge horn here. It's 30-40 feet long. Evelyn yells "hello" in the horn. It echoes throughout Kronenheim.

Three voices, giant voices, ask each other what that noise is. A billowing curtain pulls away and reveals the creature speaking. It's a 30 foot tall frost giant with three heads. End of session.