This is Episode 6 of Dice, Camera, Action.

Episode 6: All Will Be Well[edit | edit source] 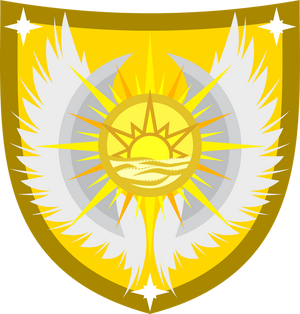 The crew enters Vallaki and they spot Rictavio's wagon of wonders. Evelyn gets excited and the group goes to check it out. Evelyn knocks and loudly inquires about the wonders. They hear a commotion inside - wood cracking.

A tall, heavily-muscled woman approaches and warns the heroes not to go into the wagon. Her name is Dee. Dee is 6 1/2 feet tall, she has dark hair and scars all over her face. Apparently she is part of Rictavio's show - she's a strongwoman.

Dee does card tricks. Erika actually has a deck of cards and does a trick.

The group goes to the Blue Water Inn. Paultin plays music in exchange for free rooms. He rolls high on his performance check. Dee and Evelyn dance.

Two hunters who "smell like barf" tell Evelyn that she's going to die soon. Dee tells them to shut up.

Strix makes friends with the owner, Urwin Martikov. He talks to Strix about Izek Strazni - a dangerous man with a demonic arm. He also warns her that the Burgomaster of Vallaki is crazy.

Strix helps out in the kitchen. She spots a waffle maker!

Dee introduces the group to Rictavio. Evelyn subtly peers into Rictavio's journal and sees notes about someone named Filmore Stunk. She can't make out the whole line.

After a bit of discussion, Rictavio starts translating Madam Eva's reading for them. Rictavio basically gives the group a road map for the campaign:

Strix talks to Rictavio alone and intimidates him, warning him that if he doesn't help the group, they're stuck here. Rictavio tells her that he's cursed by the vistani and if he helps them, they are doomed.

Paultin is drunk and can't remember his reading. Evelyn remembers. Chris gives her inspiration for that.

The group goes back downstairs, and they spot some menacing town guards nearby. Diath detects a secret door (he rolled a natural 20 on his check) and the group slips through.

A guard spots them and calls out for the group to halt, but they shut the door and go down the hall. The group ends up going through a few rooms and they peer outside the inn.

They spot Izek and a bunch of guards outside. One of Izek's arms is huge, red and demonic. The group tries to keep out of sight and creep away. Dee goes out there and tries to distract the guards with a card trick. Izek questions her, sees through her deception and we roll initiative.

Izek pulls out a huge axe and does 21 points of damage to Dee. Dee hits him with her shield and knocks him to the ground, then she stabs him with her spear.

The group comes out to help.

The Battle Against Izek[edit | edit source]

Diath flings some daggers and kills a guard. Evelyn charges out and hacks a guard with Lightfall, her axe. She rolls a natural 20 and cuts a guard in half.

Izek does somewhere around 30 points to Dee. The guards stab her for more. She's still up. Evelyn heals her for 9 points.

Paultin casts invisibility on Strix. She calls out to Izek and tells him that she's his sister. She casts mage armor and becomes visible. Izek stops the fight, runs up and awkwardly hugs her. That's where we stop.