This is Episode 60 of Dice, Camera, Action. 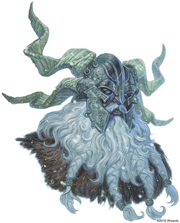 Evelyn blew a giant alpine horn, and alerted a massive three-headed giant known as an everlasting one.

The giant charges across the room and Xandala has her ship rise in the air above the giant. On the ship, Paultin summons the waffle hut and takes refuge inside. Paultin and the dragon cultist crew are in it together, safe.

On the ground, Diath runs up, draws Gutter and slashes the giant's ankle.

Xandala casts fireball and does 42 points to the everlasting one. The group is very pleased with this. Strix is dismayed. She never gets applause for her spells.

Paultin is unhappy when he notices that the crew of the ship are quietly discussing slitting his throat.

Xandala sees that the giant is regenerating. The giant rages and does 56 points to Xandala, who is bloody, but still conscious. Some of her blood pours onto the dome of the magical hut. Paultin is even more alarmed.

Evelyn blinds one of the three heads with blinding smite. Strix polymorphs the giant into a three-headed bantam chicken.

From the back of the hall comes a giant vulture made of ice ridden by a human in a winter parka. Xandala recognizes him. It's Artus Cimber.

Xandala tells the group that he has the ring of winter. Paultin really wants the ring so that he can create his own ice vulture.

The cultists leave the hut, run up and destroy the vulture. Artus falls off of it.

Artus Cimber is a middle-aged, athletic, handsome man with a mustache and beard. He has hair down to his shoulders and wears leather armor. He's got gloves on, probably covering the ring on his finger.

Evelyn runs over to him and tells him to stay down "in the name of Lathander."

Paultin leaves the ship and heads toward Artus. He tries to convince Artus to give him the ring, saying "Ice bird please." Artus warns him that the ring will control one who is weak of mind. It is evil.

Paultin casts levitate on him. It works. Artus is hovering.

Strix is on her broom and now she has the chicken. She sticks it in one of the cages up near the ceiling.

Diath watches the cultists for a moment. He doesn't trust them. While doing so, he spots a white dragon in the sky! It's Isohedrus.

Xandala tells Paultin to get the sending stone from the cultists. She says that the cultists have been using it to talk to the red dragon, Klauth.

The cultists turn against their captain. Nyzroth throws daggers at Xandala, but she uses a shield spell to block them.

The dragon approaches. Its frightful presence power kicks in. Evelyn and Paultin make their saving throws.

Strix kills all but two of the cultists in a fiery explosion.

Nyzroth is still up and so is the woman with the stone. She's grappling Evelyn. Diath runs up and snatches the stone with a 31 on a sleight of hand check.

The dragon claws and bites Artus, who is bloodied.

The dragon hisses at the heroes, "This is between him and me." The group is accepting of this.

Xandala knows that this might be Isohedrus, a dragon that lives in a crashed icy citadel.

Xandala tries to polymorph Isohedrus into a sea cucumber, but the dragon makes its saving throw.

Artus uses a power called flesh to ice. If the dragon fails three saves, it will become an ice statue.

Artus starts running for the airship. The female cultist runs over to Xandala and hits her twice, once with a critical hit, dropping her to exactly 0 hit points.

Evelyn drops the cultist with Treebane. Nyzroth is the only cultist left. Strix fireballs Nyzroth, shaping it around Diath. Nyzroth is dead.

The dragon breathes ice and hits Diath. He takes 54 damage and he's down. Evelyn uses lay on hands and Diath springs back to life. Evelyn takes back the Heart of Spinelli, her flaming sword that Diath had been holding for her.

The flesh to ice spell is successful. The dragon turns into an ice sculpture. Evelyn heals Xandala and gives her the stone. Evelyn wants to use her fire sword to try to melt the statue. She writes an "E" for "Evelyn" in it.

Xandala hears a voice through the sending stone. It says, "Report." Xandala says that the cultists are dead. Klauth says, "I'll come to you in three days."

Diath notices that Strix is gone and he is extremely concerned.

We learn that while the group was mopping up the bad guys, Strix had heard somebody talking over her shoulder. Someone was speaking arcane words - an infernal incantation. She's gone.

Diath grabs Xandala and demands to know what she did.

The group gets on the ship, ready to search the area for Strix. Diath doesn't waste time putting a key in Gutter.

Paultin feels an itch. He scratches himself and a piece of his neck comes off. End of session.

What happens to Strix next is detailed on the Acquisitions, Inc. podcast: Enter the Trash Witch.