This is Episode 66 of Dice, Camera, Action.

Evelyn is enjoying being large. Strix enlarged her so she could fight the t. rex. Her enjoyment is bothersome, so Strix cancels it out.

The heroes come upon a large, ruined structure. Partly covered in vies are giant stone feet on a dais. Behind it is a passageway going into a hill, underground. The heroes spot some ghostly children moving further in.

Strix decides to check it out. She steps in and immediately falls into a pit trap. She takes 8 points of damage as she falls 20 feet to the bottom of the pit.

Diath looks for traps and is hit by whirling blades, which Holly finds to be hilarious. The group gets past the scything blades.

They see the ghost kids climbing up a 10 foot tall ledge. Evelyn can't wait to play with the children. Strix quietly judges her. Evelyn somehow senses it.

They come to a room where sunlight streams down through holes in the ceiling. It's a cobweb-infested vault with a pillar of stone containing a staircase winding up outside of it. They see the girl on the shoulders of the boy, going up the stairs.

Diath spots a glyph of warding. Paultin plays the maracccas, and Diath tries to disable the glyph. He rolls a 22, which is a success.

In the room beyond are dinosaur bones. The children scuttle out of view.

They see carvings of a crocodile carrying a man. These images depict an old legend in Chult about a crocodile who tricks a man into carrying it around over vast distances.

Evelyn holds hands with Wumba, and they try to ascend the steps. He's hit by lightning from the pillar. He makes a saving throw and rolls natural 20. Evelyn helpfully warns the group that there's lightning in here

Wumba only has 13 hit points remaining.

The Secret to the Shrine[edit | edit source]

Wumba worships Dendar, the Night Serpent - an evil serpent that wants to eat the sun. He thinks about the legend of the crocodile and figures out the key to circumventing the many traps in this place. You have to climb on someone's shoulders

They climb up on each other's shoulders. Diath had been carefully removes other glyphs of warding. The group chuckles that he risked himself for no real reason.

The group comes upon a holy container. Evelyn thinks it is linked to Lathander and she does a little dance. In it is a flask of golden light. Wumba snatches it.

Wumba is holding it hostage. He wants Evelyn to say that Dendar is great or he'll smash it. She refuses. He spits on it and hands it over.

Strix examines it and senses that it has some sort of transformative ability. Strix thinks it is for Evelyn, and that it will turn her back into a human.

Evelyn doesn't think Lathander sent this to her. The group asks Paultin to convince her, but he has nothing. Diath steps up and explains how blessed Evelyn is. 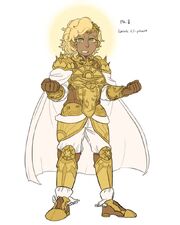 Evelyn drinks it! Light swells around her and she vanishes. The whole shrine is collapsing. The group uses magic to escape, leaving the goblins behind. Chumba and Wumba are in trouble.

Wumba jumps down the descending hall from which they came, using his brother to break his fall. Chumba's dead. He wants his brother's whistle and kicks his head off to get it.

Wumba has 1 hit point left and he has to jump across the pit trap. He blows the whistle and leaps... rolls a 7. He starts to fall, but someone catches him. It's Dragonbait. He heard the whistle.

They escape. The place collapses, Chumba is dead and buried. Paultin quietly witnessed everything that happened, as he was in gaseous cloud form. Paultin seems appalled.

Wumba senses that the waffle crew is about to turn on him. He uses expeditious retreat, holding up middle fingers as he vanishes into the jungle.

The Palace of Sunlight[edit | edit source]

Meanwhile, Evelyn awakens in a palace of sunlight. Standing nearby is a golden giant with glowing eyes. This is Saint Andral, a servant of Lathander. He gives her a choice:

She chooses the enhanced form. The new body gives her a 22 Constitution.