This is Episode 73 of Dice, Camera, Action. 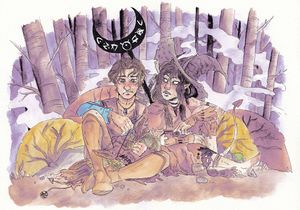 The group is in the jungle and they are hungry. They meet an old tortle fellow who is humming to himself. There's no sense of death or decay around him.

The tortle's name is Xopa, an old, friendly fellow. He says that he's not long for this world.

Xopa asks the group to help him cook a big meal. The group introduces themselves to him.

As they cook. Xopa wants to hear their stories.

Diath talks about his time in Waterdeep. Diath was having lunch on a rooftop. In the crowd below, and he saw a "black mass" moving among the people. It was Strix, who was living on the streets. He noticed that the crowd was either avoiding or ignoring her.

He could see that she was hungry, so over the next few days he started leaving her food anonymously. When he first tried to engage her, she cast a firebolt at him.

Eventually, Strix warmed to him and they traveled together for a few years. They funded their meager adventures by going on small adventures.

How the Group Met[edit | edit source]

One day, Diath and Strix decided to stay at an inn called the Rusty Pommel. Evelyn was there.

As a paladin, Evelyn loved to listen to music. She had discovered Paultin playing in filthy bars, and attended all of his shows. She never said anything to him. Paultin played at a number of venues, because he'd get into trouble with whatever bar owner he was working for.

Evelyn was listening to Paultin's music when Diath and Strix entered.

The "jackhole" bartender/owner accused Diath of stealing his coin pouch. Paultin was very drunk and couldn't really play music coherently. Diath hadn't stolen it. The guy started insulting Strix. Because she was a tiefling, most people in Waterdeep assumed that Strix was evil.

Evelyn saw the commotion and came over. She stuck up for Diath and Strix. She punched the bartender! Evelyn tells Strix and Diath that she didn't want to see their "romantic dinner" ruined. Strix is quick to point out that it wasn't romantic.

Things escalated and a bar fight broke out. People were throwing food. Strix grabbed the morsels off the floor and kept them.

Paultin was sick from excessive alcohol consumption. He knew that he needed to get out of the bar, in part because he was the one who stole the coin pouch. Evelyn asked Paultin to come along and he decided to join them.

From that point on, all 4 of them adventured together.

Evelyn and Paultin go into the jungle to find some mushrooms.

Evelyn wants to apologize to Paultin. When she was almost pulled into the Soulmonger, she thought it was because she was found unworthy to pass into Lathander's Court. She thought Paultin was thwarting Lathander's plan for her. She didn't realize that Lathander was working through Paultin.

Paultin says he saved her because he saw that somebody he cared about was in trouble. It wasn't because of Lathander. Somewhere in here, Evelyn reveals that she's jealous of Escher.

Strix is wondering why the Skizziks are after Diath.

Diath tells Strix that he actually saw the Skizziks when the group went to Sigil a few sessions back. Strix is dismayed to hear this. They keep wondering what the "Skizziks Kazrum" is.

In the jungle, Paultin says he had noticed Evelyn in the crowd way back when. They return to the camp.

Before Diath met Strix, he was all by himself. One day, he was in a tavern where a bunch of adventurers were throwing money around and bragging about their recent exploits. They saved Phlan, and more recently, they killed a bunch of gnolls.

Diath left and decided to check out the lair, looking to scavenge stuff they missed. He found a pouch. In it was an amethyst. It was only worth a couple of gold, but he considers it his most precious treasure. Diath had discovered a new path in life that could help him survive.

Paultin and Strix go into the jungle to get some bark. She starts drinking Paultin's wine and she advises him to stop drinking so much. She tells him to work on showing emotion, because he's tearing the group apart.

Paultin admits that he keeps everyone at arm's length because he is sure that they will die or leave him. Strix does not accept this. Strix says that she was alone for 50 years and she's not losing anybody else. She runs back to camp, crying.

Evelyn comforts her. During her 50 years alone in Barovia, Strix had made creepy little dolls of the waffle crew. [1] Strix takes out the dolls and gives each character their puppet. It looks like Holly actually made the dolls in real life and mailed them to the players.

She also wrote each of them a note:

Paultin gives Strix a drunken hug. It transforms into a group hug.

Diath says that if Strix makes another doll, he'll trade his for it.

Diath tells the group that he shouldn't be their leader. Strix says he has to be the leader. If not, they'll die. Diath pulls Evelyn aside.

He tells her this little story about how he looks to the stars every night and that she is the brightest of them all (this speech is transcribed here). He tells her not to give up on Paultin.

Evelyn asks Diath when he knew he loved Strix. He says: "The first time I saw her eyes not clouded with fear." Diath goes back to camp.