This is Episode 8 of Dice, Camera, Action. 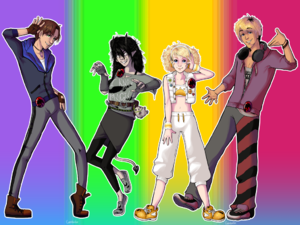 Strix is with Lady Wachter. She brings Strix down to the cellar to meet Wachter's "book club" (band of devil worshipers). Strix is freaked out, so she makes up a story about cats on fire. Lady Wachter sees through it.

Strix pulls out the demon ichor that she took from the hags. She throws it on the ground and casts firebolt on it. She rolls a natural 20 and ignites it, causing an explosion. The robes of the cultists burst into flames. Strix tries to run to the stairs, but a skeletal hand reaches up from under the floor and grabs her ankle.

Meanwhile, over in the Blue Water Inn, Evelyn wakes Paultin up. Ireena is there, too. They head out to the stocks to find Diath. They spot a huge flock of ravens hovering over the town square. The heroes hear what sounds like children screaming.

Back in the cellar, Strix casts misty step. She teleports out of the hand's grasp and appears at the top of the stairs. She opens the door and is looking for an exit. Her brother, Izek, is banging on the door outside the house calling for Strix. She runs over to him. Wachter's spy, Ernst, is lying on the ground. Apparently Izek beat him up.

Strix teams up with Izek and they head back down into the cellar. Five skeletons rise up from the ground and attack Izek. Strix tells Wachter to "Suck it." As Izek does battle, Strix runs away out of the house and in search of her allies.

In the town square, a guard is being attacked by a flock of ravens.  Evelyn spots Diath. He's dead, hanging from a noose.

Evelyn prays for Diath, and Paultin plays a song. Suddenly, time slows for Evelyn. The world is responding to her dismay. Evelyn calls on Lathander to save Diath. Evelyn senses that Diath has not gone into the light.

Looking up, Paultin sees a massive skull in the clouds. It dissolves.

Strix arrives and the group is united once more. The group brings Diath's corpse to St. Andral's church. Ireena heads to the inn.

The group starts arguing about whether Diath's spirit can move on or not. The priest says that nobody's soul can leave Barovia.

The priest says that the Abbot of St. Markovia's Abbey might be able to help. He says that, to get there, "You must travel through wolf-infested forests.."

The group leaves the church. Both Strix and Evelyn say goodbye to the handsome gravedigger. He stares at them dumbly.

Ireena pays the hunters (Szoldar and Yevgeni) to come along with them. The owner of the Blue Water Inn tells the aventurers that, if they can, they should check out the Wizard of Wines winery. Wine shipments have mysteriously stopped arriving.

Diath's body is wrapped up in a blanket like a "corpse burrito." Paultin flirts with some really harsh guards, and the heroes leave Vallaki.

As they hit the road, they spot a vistani camp nearby. The NPC hunters refuse to go visit the vistani. The group decides to check out the camp. Strix has a spontaneous freakout over Diath.

When they get themselves together, the group approaches the camp. A guard warns them that they should go away. The guard is an elf with dark eyes and skin. He's a dusk elf. He tells Evelyn that most of the vistani are out looking for a missing child named Arabelle.

Strix says, "The Waffle Crew will be back."

During their journey on the road, the group passes Argynvostholt, home to the Order of the Silver Dragon. The wolf hunters are alarmed at the lack of wolves. Strix assumes there's a wolf army waiting for them.

The group arrives at Krezk.  That's where we stop.