This is Episode 86 of Dice, Camera, Action.

Chris kicks this session off with a reminder/rundown of things the characters can do. 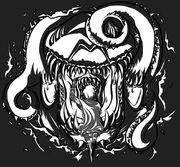 Simon is still a puppet, but now he has an animated mouth. He says: "Oh my stars.. i can tell jokes!"

Simon proceeds to tell a lot of jokes:

Why was Strix late for the waffle crew reunion?

What does a clock do when it's hungry?

It goes back four seconds.

How do you make a clown cry?

You kill his family.

What did the shoe say to the pants?

Why did the scarecrow win a prize?

Because it was outstanding in its field.

Where does Papa Paultin keep his gold?

The group is on a beach in the Shadowfell. There's a hole in the cliff wall. Looks like a tunnel.

They sense the presence of the ring of winter.

Paultin's invisible. He uses one of his candles for light and he creeps around in the tunnel. Inside are colored floor tiles that form paths down the corridor like snakes. There is a gash in the roof of the tunnel.

Why was the zombie upset with his job?

He wanted a raise.

The heroes decide to walk the golden path. Tentacles drop down through the crack and attack.

Diath stabs the creature and rolls a critical, doing 56 points of damage.

The tentacle creature, a balhannoth, has legendary actions. It does a lot of damage to the group, but the heroes are able to wound it in return.

It snatches Evelyn and teleports up and away into a rough-hewn rocky chimney.It's not too far from where the rest of the waffle crew is. Strix flies on her broom up the chimney and hits it with a fireball for 52 points of damage.

The fire fills the tunnel and funnels back down at Strix. She is engulfed by the flames and is reduced to 0 hit points. Simon is scorched, too.

Pieces of Evelyn come falling out of the crevasse. Her head hits the ground and rolls over to Paultin's feet.

Paultin hits the balhannoth with a thunderwave and destroys it.

Her spirit arrives in a strange realm. There are many towers and twisters that connect to an amorphous moon with limbs attached to it. It's impossibly huge.

Evelyn is not alone. There are other beings, here. Like her, they are spectral.

The other creatures gathered here:

The gnome looks at Evelyn and says "I know you! from Omu!"

The old woman introduces herself to Evelyn. Her name is Zaress. She is a champion of the church, and she took the faith to some of the darkest corners of Faerun.

The spirit of an orc appears and joins the congregation. There's little for them to do except to wait to be devoured by the massive entity.

The entity extends long tentacles. The tentacles wrap abound the tiefling and pull him into the sky. He yells, "I hope you choke on me!"

Zaress looks at Evelyn and says, "I sense something strange about you.. something different than all the other ghosts."

They talk for a bit. Evelyn's the worm in the apple. Zaress thinks that if the atropal tries to devour her, she will destroy it.

Zaress says, "Everything will be alright. You are loved."

Evelyn flies up and tells the atropal to take her instead. Persuasion check: Natural 20!

She's drawn up into the vortex. Perception check: natural 20.

The towers are shuddering. One collapses.

Back in the Shadowfell, Paultin calls out, "Lathander you punk bitch, give her back! Hallowed be thy name, gg."

He checks on Simon. Simon is dead - a burnt hunk of metal. Face is burnt off.

The ghost of Simon appears on the tower with the other spirits.

Evelyn is drawn into the vile gullet of the atropal. It is an unborn god.

Evelyn transforms into sunbeams that tear into everything.

Throughout the multiverse, all hit point maximums are restored. The death curse is over. End of session.