This is Episode 89 of Dice, Camera, Action.

Anna starts off this session as the DM. 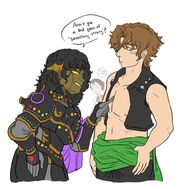 Strix rolls a death save. She gets an 11. Umpox is invisible, flying near Evil Paultin.

Someone claps and steps out of the shadows. She's made of wood and metal, colored black and gold.

She looks the group up and down. She touches Evil Diath's face and goes, "Aren't you just a tall drink of something strong?"

She likes their style. She asks them if they're going to finish the waitress off. Evil Diath stabs Martha to death.

She tells the group that they can be her followers. Evil Evelyn wants to be the leader. A fight breaks out.

Umpox disengages, flies 80 feet into the air. Evil Diath throws some daggers at him, and he dies. He was holding an eye (a hag eye), which gets squashed.

Evil Evelyn heals Evil Strix. She says, "Let's douse the flame of hope and rule with an iron fist." The awful crew has been assembled.

Chris takes over in the DM seat.

The hags are about to speak, when something appears in the cauldron. It's the evil little girl that the awful crew put in the bag last session. [1]

The hags want to eat her. The group stops them. The hags put the little girl to sleep and place her in a cage.

The adventurers are quietly talking amongst themselves. The hags overhear the group mention Shemeshka. Later, they hear Strix mention Gutter. The hags are very interested.

Two of the hags leave to obtain the items. This will take 1 day. The group will have to wait here. The hags split up their tasks:

Groat asks Strix asks what her coven is called. Strix blurts out that it is the chicken foot coven from the Feywild.

Groat says, "We are the Sewn Sisters." She pulls out some red thread. "Snip snip." "Stitch stitch."

Something else appears in the cauldron. It's the remains of Shmon Shmeena.

Widow Groat says to the group, "You've stepped into an arcanaloth rivalry. Mr. Fox vs. Shemeshka. All arcanaloths want is magic and knowledge."

The group quietly discusses and idea. They want to find the book that has Shemeshka's truename in it. With it, they can have power over her.

Strix asks Groat if she knows any truenames. The hag offers some for another trade. What can the group offer? They go through their equipment. Some of their ideas:

Groat comes up with an idea. She wants Strix to carry a child for her. Diath hates this idea, but Strix seems open to it. Diath begs Strix not to do it.

Strix asks Groat if she could stop Shemeshka. Groat says that she could.

Widow Groat shares a secret. Widow Groat whispers to Diath that when Shemeshka mediated the deal between the Skizziks and the Lorcathas, Shemeshka kept a piece of his valuable, ancient soul. It's locked in a box in her house.

"Would you like me to bring you the box?", she asks."The Box for your womb."

Strix thinks about it for a moment and says yes. Diath is very alarmed.

Widow Groat gives them time to discuss it.

Paultin walks over and watches Groat chop up the corpse of John Cena.

Suddenly, the hag reels. When Umpox was slain, the hag eye was destroyed. It is linked to her, and thus she is temporarily blinded.

Evelyn's soul is in the domain of Lathander. She asks around, hoping that Simon's soul is here. His soul must have went somewhere else.

Evelyn says all she ever wanted was to be wanted. She thinks Simon felt the same way, so she's hoping to give Simon that same feeling.

Evelyn realizes that she can talk to her dad, who passed a way long ago. Evelyn flies to a glittering temple on top of a hill.

In the temple are people cradling spectral babies. Watching over the scene is a 12 foot tall green angel. A planetar.

The babies transform into young adults. One of them is Evelyn's dad. She hugs him. She learns that her mother is in one of the great temples of the Morninglord.

Her father tells her, "It doesn't look like you may be here very long. You're just here for a short visit."

She flies around with her dad. She asked him why he never came back. She never knew what happened.

He explains that he went into Undermountain, the giant dungeon underneath Waterdeep.There's a family that has fallen into the dark service of Shar. They infiltrated cities.

While in Undermountain trying to bring light to the darkness, Evelyn's father was killed by a vampire named Karesta Delvingstone. It sounds like his body is still down there.

Evelyn's dad wants to go tobogganing (sledding). Evelyn is up for it.

Back in the Material Plane, Groat's eyesight is returning. The group notices a strange, giant door.

After 1 full day, Baggy returns. She walks through the wall and is holding a blackened scroll tube. "One resurrection scroll", she says.

While the group is in the waffle hut, they overhear the two hags having an argument about the destruction of the soul bag. They are angry at the awful crew.

The group overhears the hags scheming. They get the sense that all three hags are plotting against one another.

The third hag returns. Widow Groat starts talking about Strix carrying a baby again. Diath takes Strix's hand and tells her not to do this. He says they'll make it through this, like they always do.

Paultin, Diath, and Strix hand over their hair. In return, the hags give the group the items. Each hero takes one:

Diath slyly starts talking to the Sewn Sisters, pointing out that the hags have been talking about ousting each other. They start fighting.

Taking advantage of the chaos, Diath frees the caged little girl and looks for a secret door. Strength check to open it. Paultin rolls 17. He makes it.

They appear in the outskirts of Port Nyanzaru, emerging from a ruined ziggurat in the old city section.

Strix wants to use the Halruaan Force Bomb to collapse the tunnel and block the exit. She realizes that the blast radius is too big, and backs off on the idea.

The little girl that they freed thinks the group is the awful crew. She steals the spectacles from Diath and runs into the city. End of session.