This is Episode 9 of Dice, Camera, Action.

Nate couldn't make it this week. 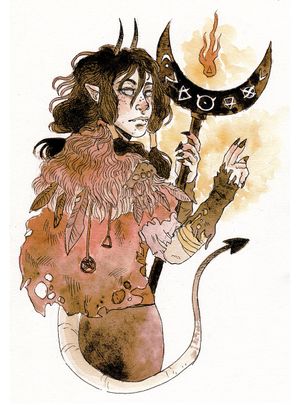 We start by going back in time to last session, experienced from Diath's point of view. Diath is a disembodied consciousness. He sees himself hanging on the gallows. Hundreds of ravens descend on the town square. They attack and chase off everyone - guards, townsfolk, and citizens alike.

Diath watches his allies pull his body off the gallows. He senses that the mists want to bind him to this location forever. Diath blames all of this on the kid that was chucking rocks at him.

Diath is able to connect to Paultin's spirit. In fact, Diath realizes he can control Paultin's body and perhaps the bodies of other people!

It takes Diath a long time to get acclimated to Paultin's body and we skip to the group riding to Krezk, which is where last session ended. The group has Diath's corpse with them and they want to have him resurrected.

Diath is now in control of Paultin. He says hello to the group.

Diath tries to prove to his allies that it is him by doing complicated dagger moves, but it turns out that he has Paultin's stats! He rolls an 8. His dagger flops into a bush.

Diath goes to retrieve his dagger. As he does so, he stumbles upon a corpse of a peasant from Krezk who has been torn to pieces by wolves.

He spots tracks. From what he could tell, someone ran into the woods and the wolves didn't chase them.

The group arrives at the walled-in village of Krezk. There are guards on the wall. The group wants "Paultin" to do the talking and it doesn't go well. Paultin/Diath ends up asking what the business hours are for the monastery.

The guards think Evelyn is Saint Markovia and let the group in. We learn that the son of the "Burgermaster" of Krezk died. The Abbot brought him back to life, and then the son slashed his dad's throat. The Burgomaster is alive, but his vocal cords are cut and he can't speak. His wife speaks for him.

The heroes further learn that the son fled into the woods, along with a peasant lady. The heroes realize that the peasant lady is the corpse the group found earlier.

The Burgomaster's wife tells the group that the Abbot is nuts, and that when he resurrected their child, the child was different and evil. Diath really doesn't want the Abbot to resurrect him.

Diath tries to access Paultin's memories. Opposed charisma checks. Jared rolls a 3 and thus loses, so no memory access for him.

The group thinks about exploring the abbey. It's night, so they decide to rest and check out the abbey in the morning. They stay with the Burgermaster.

At night, it's cold. The group sleeps on a wood floor. They can hear the Burgomaster's wife taking care of her husband downstairs.

Next morning, the group heads to the abbey.  Out of character, Chris asks Jared if he is comfortable in Paultin's body or if he wants to find another vessel. Jared says he's fine.

As the group talks outside the abbey gate, a mongrelfolk woman with patches of fur and lizard scales on her body comes around a corner and offers to bury Diath's body for them.

Another mongrelfolk comes out, too. Strix gives them food she looted from the Burgomaster.

The mongrelfolk let the group into the abbey. Evelyn is carrying Diath's corpse. Strix chucks a rock at a scarecrow. The group heads to the main building and knocks loudly. The only response is the sound of wings flapping.

Evelyn uses her boots to fly up and look over the wall. She sees fog swirling down there and spots a creature chained to a post. It's a mongrelfolk with bat wings. It's trying to fly off but it can't.

Evelyn calls to the chained mongrelfolk. She asks it if it is OK. It asks to be freed before its enemies come and kill it. It warns that its enemies are watching.

The group hides. Strix turns over a horse trough and climbs underneath. Evelyn grabs Diath's corpse and hides in a shed. Diath/Paultin hides in the well, holding onto the wall.